The belt itself is rather unique. The name of the champion is engraved onto a plate, which is then placed on the face of the belt and protected by a locked gate. For a competitor to be a challenger for the title, he must secure a Challenger's Key. If the champion successfully defends the title, the loser's key is added to the belt as a trophy. If the challenger wins the title, they key will unlock the gate, allowing him to replace the old nameplate with his own.

Each champion can devise their own method for how one can secure a Challenger's Key. Most of the time, these are done through the creation of matches, like in CIMA's third reign by holding battle royal matches dubbed CIMA Royale. Other times, there are different methods, such as when Masato Yoshino used a lottery system to determine his next challenger. Sometimes, the winner of the King of Gate tournament will be granted a Challenger's Key as proof of their being the strongest competitor over the previous one year period.

Since its inception, Dream Gate has not only been defended in every Kobe World Hall pay-per-view event, but it has also been placed indefinitely as the show's main event. A slight exception was made in 2006 when a No Rope Bonus Match took place after the Dream Gate match, and while it appeared to have aired on pay-per-view it was officially considered a post-show dark match.

In 2013, then-champion CIMA vowed to defend the belt once every month so long as he remained champion. Though his reign ended in July, the concept remained with the addition of the belt being defended on every show at Korakuen Hall. This is even if it had already been defend on another show during the month, such as Masato Yoshino defending on November 3 as part of the GATE OF DESTINY pay-per-view and then the belt being defended four days later at Korakuen Hall. 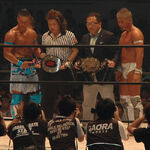