It was created in WAR on February 23, 1996 when Gedo and Lionheart defeated Lance Storm and Yuji Yasuraoka in a tournament final. It was deemed inactive in 2000 when WAR folded, and was later revived by Dragon Gate on August 8, 2006. The I-J belts would be unified with the new Dragon Gate Open the Twin Gate Championship, a tag title made specifically for Dragon Gate, on October 12, 2007. In September 2010, the championship was reactivated by Tenryu Project. Template:- 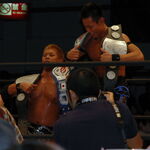 Retrieved from "https://dragonsystem.fandom.com/wiki/I-J_Heavyweight_Tag_Team_Championship?oldid=7651"
Community content is available under CC-BY-SA unless otherwise noted.